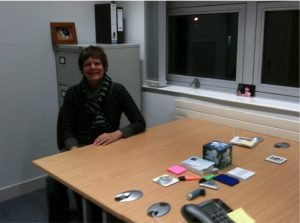 It’s hard to believe that it’s over 7 years since Deborah and I sat down together and said ‘let’s set up our own business’ (and even harder to believe that we’re still speaking to each other!!). Suffice to say I am extremely proud of what we have achieved. What started out as ‘York Student Support’ has developed into a business that not only works with students but provides domiciliary support for people in York. I’m sure that the reason for our success is that Deborah and I complement each other so well and we have the support of a brilliant, dedicated staff team.

My role in the business is still predominantly to coordinate our academic support for disabled students. I still get the opportunity to work ‘hands on’ with our students who have a visual impairment – something I particularly enjoy doing. We have worked with some lovely students and I must admit to having a real soft spot for ‘my students.’ I love working with young people – it’s brilliant to be able to support them to achieve their goals at such an exciting time in their lives.

Out of work time I’m a bit of a home bird and a real nature lover and enjoy nothing more than spending time with the dogs and cat, being out in the garden, waiting to see Spike our hedgehog, the local foxes and frogs peeping out of the pond. I’m particularly interested in birds and wild flowers and get really excited when I see one I haven’t seen before!! I also like Radio 4, but please don’t tell anyone!!!

Could one of our Service Users and his PA be winging their way across water to the next Cannes Film Festival? Probably not but they have recently taken part in an exciting project headed up by The Guardian.

The Guardian are currently making a series of online short films on the subject of Autism and were tackling the subject of adult diagnosis and employment.

Keran , a service user with Aspergers and ADHD, has been supported by YPS for almost two years. He recently expressed an interest in returning to work and with support from his partner and his PA Meika this was recently achieved.

Keran was approached by The Guardian, via the National Autistic Society, who he has worked with previously, and asked if he would be interested in making a documentary over a couple of days for this piece.

He was filmed at work, out on his bike on his Deliveroo round, collecting orders and delivering them to customers.

He was filmed at home chatting about his Aspergers and ADHD, his diagnosis and how it has affected him and his daily life. He was also filmed with Meika, his PA, carrying out his daily routine with her support. Please view the film by clicking here

We are proud to have received some lovely feedback from our service users recently. We love hearing from you and always feed back to the team. Thank you for taking the time to let us know how we are doing J

“I am very happy with the company and particularly with my carer….She is professional, kind and caring. I enjoy her company and we get on well”

“….the carers bring objectivity, care and kindness, flagging up any issues they notice for Mums health or mood and helping me find a balanced way to deal with problems-giving me the support and space to keep going, though I’ve often felt overwhelmed in the past….”

“thank you for everything over the last 3 years, and all your hard work and effort is truly appreciated. Thank you for building my confidence in using a cane, it’s been such a huge part of my university journey”

All of us at YPS would like to officially welcome summer to York!!

We would also like to welcome some new additions to our team!!

We sadly say goodbye to Plamen Andreev who we wish every success as he commences his Masters Degree in Essex.