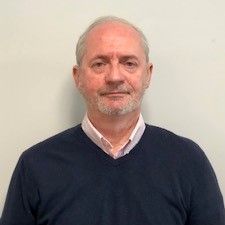 My story begins in Pickering where I spent my first 29 years before moving to York.  I went to Scarborough and York college studying Engineering.  My first job was as a Purchasing Officer, subcontracting components for submersibles which were used by the Oil Industry and the Ministry of Defence.

The one constant was music. My brother bought me a ticket for my birthday to see The Who (never to be forgotten partially because I was deaf for a week). I’d joined a local reggae band until we had musical differences and the rest of the band realised, I couldn’t play a note!! I wouldn’t let a little thing like that stop me!!

The bright lights of York were calling so I moved, and it was at this time I started volunteering, working with Young Offenders and Youth Club work.

After an intense interview I eventually became a Samaritan, working 3 years with them.

I was now a Purchasing Manager and having spent 25 years in a factory environment I decided a change was needed! I joined the Retreat working on the mixed mental health ward, where I learned about Cognitive Behavioural Therapy and Mindfulness.  My counselling skills from my Samaritan days were put to good use. Eventually I transferred to another ward and at this time I studied massage as a therapy.

With the help of the Retreat’s therapeutic committee, I opened a clinic a couple of times a week with positive outcomes.

After restructuring at the Retreat I decided I needed a change and joined YPS. It was daunting at first, but it wasn’t long before I felt at home.

I still see live bands when I can. I’ve seen loads over the years for which I’m grateful.  I’m a keen rugby supporter, especially in the club house!! I have also recently joined the York Philharmonic Choir! 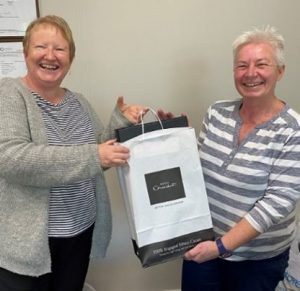 Congratulations to Clare Harbour, who was presented with a certificate and delicious Hotel Chocolat gift box to celebrate her five years at York Personal Support, and to thank her for her loyalty and dedication.

The Care Quality Commission (CQC) is now assessing care providers remotely each month, and we are very pleased to report that we continue to be rated as ‘Good’. We are continually striving to improve our service. One of the ways we do this is by sending out customer surveys every November to find out what our customers think of their support and whether there are any areas we can further develop or improve. Look out for these coming through your letterbox soon!

We are very pleased to introduce four new members of staff to our team. They bring with them a wealth of experience in home care:

Unfortunately, we also say goodbye to the following member of staff and wish her every success for the future: